The ad blocking phenomenon has caused quite an upheaval in the publishing industry. With so much discussion and debate about ad blocking and its impact on the industry, we think its important to focus on the key issues so we spent some time exploring the origins of the phenomenon, how the industry is responding to it and what is driving it. The result is our in depth analysis in three parts.

This is the first part of our “Ad Blocker Strategies” series. In this part, we trace the origins of the ad blocking phenomenon, review its growing impact and explore the first of three general strategies publishers are adopting to tackle ad blocking. You can find the second and third parts here.

Ad blocking – how we got here (and what “here” is)

Despite popular perception, ad blockers are not new. The first ad blocker was created by Henrik Aasted Sørensen who wrote the first Adblock browser extension in 2002. Ad blocker use started to grow fairly dramatically in late 2012 to early 2013 when the estimated number of ad blocker users jumped from around 39 million users in mid 2012 to 54 million in January 2013, according to a 2015 report by PageFair and commissioned by Adobe titled “The cost of ad blocking” (I’ll refer to the report as the “PageFair report” below). That figure increased to 121 million by January 2014 and 181 million users by January 2015. The estimated number of ad blocker users in June 2015 was a staggering 198 million. It is likely well over 200 million users now. To give you some context, the population of Brazil, the 5th most populous country, is currently about 205 million people.

Yet ad blockers have been around almost as long as online advertising — certainly as long as we’ve had browser add-ons and extensions. So why has ad blocking become so popular, so fast? In a word, tracking.

He pointed out that interest in ad blockers (based on search queries) only seemed to spike after the “Do Not Track” initiative seemed to fail in early 2012:

The FTC saw this happening already in 2007 and proposed “to create a national Do Not Track List similar to the national Do Not Call list.” In 2009, Christopher Soghoian, a fellow at Harvard’s Berkman Center for Internet and Society, and Sid Stamm, a privacy engineer at Mozilla, created a prototype Do Not Track add-on for Mozilla’s Firefox web browser. Soon Microsoft and Apple built support for Do Not Track in their Web browsers. Google followed in 2012.

Unfortunately, none of that mattered, because Do Not Track was just a request in the form of an “http header” spoken by the browser. In obedience to Zuboff’s Laws, most publishers and advertisers chose to ignore that request. The result was this:

Apple’s announcement in early 2015 that iOS 9 would support ad blocking added fuel to an already growing hunger for ad blockers. Apple has a strong marketshare in the mobile space and its Safari browser is one of the most popular mobile browsers. As you likely already know, there is also increasing emphasis on the mobile Web as a critical platform for publishers and advertisers as more and more consumers access online content and services from their mobile services. The result of all of this is keen interest in ad blocking and its impact on online advertising.

How the industry is responding

Advertisers and publishers have responded with different strategies to the ad blocking phenomenon. Their responses can be broadly grouped into these categories:

There are also a number of tactics that publishers and advertisers use that both form part of or operate independently of these categories which are more incremental steps to mitigate the impact of ad blocking and, at the same time, address consumers’ concerns. Some of the publishers we discuss seem to be experimenting with different options and may respond differently to you if you visit their sites with an ad blocker enabled by the time you read this.

The “Block the blockers” strategy

A few publishers have adopted a simple approach to ad blocking: if consumers want to use ad blockers, they shouldn’t be permitted to access content on the sites they block ads from. Some implementations of this strategy are fairly strict, others more measured.

German publisher, Axel Springer, gave visitors to its Bild publication a fairly simple choice: disable ad blockers or forget about seeing any content. This approach seems to have been met with some success at first glance. According to Mathew Ingram’s article on Fortune titled “Is Blocking Readers Who Use Ad Blockers The Best Strategy?” –

Matthias Dopfner, CEO of German media giant Axel Springer told the Financial Times that after implementing a similar block at its newspaper Bild, more than two-thirds of users chose to turn off their ad-blocking software. That meant 3 million more visits that could be monetized through advertising, he said.

This was characterized by the Financial Times as “winning the fight” against ad blocking software. And Dopfner has been a vocal critic of ad blockers, to the point where he has launched a lawsuit against the company that makes the most popular blocking software. 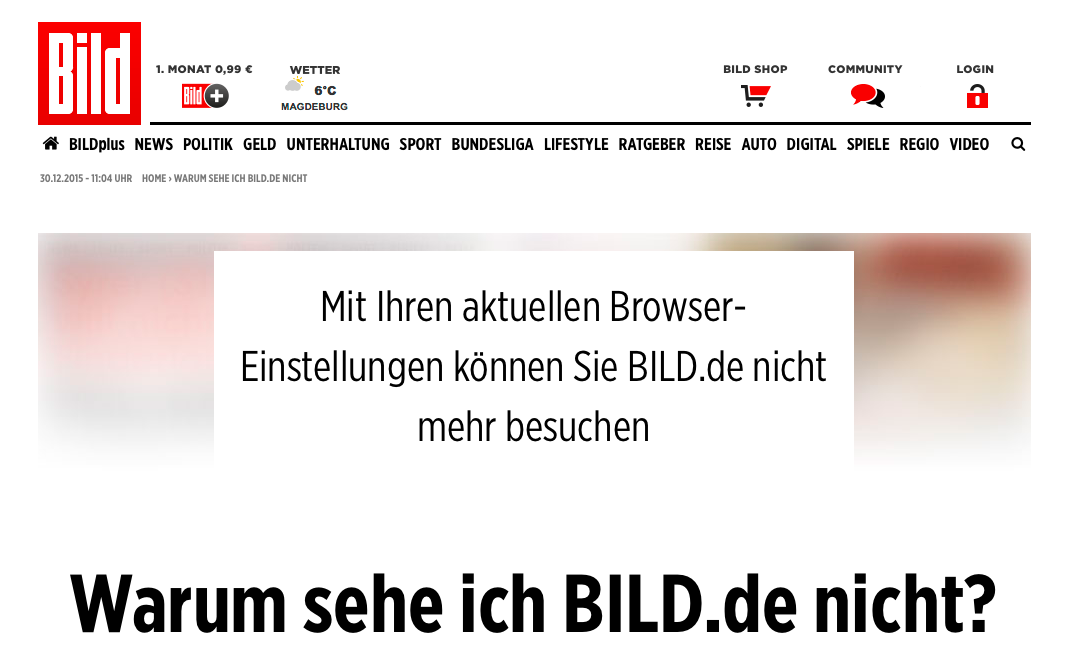 An important insight from Axel Springer’s approach is that “only a tiny number followed the included link to become a subscriber to the Bild news site”. If the purpose was to simply expose more visitors to ads then it seems to be a successful strategy. On the other hand, the very low conversion of those visitors to paid subscribers suggests that even if they feel compelled to whitelist sites or disable their ad blockers, this approach will not necessarily entice them to become more lucrative, paid subscribers.

Other publishers that have adopted variations of this strategy include Forbes and GQ (a Conde Nast publication). According to Digiday’s article titled “Forbes starts blocking ad-block users” –

The escalating battle between ad-dependent publishers and ad blocking has a new front: Forbes. The publisher last week started blocking access to the site to some users of ad-blocking software. Visitors using desktop browser ad blockers are greeted with a polite but firm message on the “welcome screen” ad page Forbes serves prior to landing on its site.

In one test, visiting pages through a browser that disabled an ad blocker does not show animated ads or autoplay video placements. The pages still have plenty of ads, however.

For instance, the top story on the site with the “ad-light experience” still serves a 730 x 90 leaderboard, three 300 x 600 pixels display ads, along with eight “from the Web” paid content placements. However, the ads do not include autoplay video or animation.

Forbes’ approach was more flexible than Axel Springer’s in that Forbes seems to be intent on adjusting the parameters of the “ad-light experience” based on feedback it receives from the experiment and has stated that it’s “not all or nothing”.

GQ’s approach was a little different and a hybrid of this “Block the blockers” strategy and the “Expanded choices” strategy I’ll describe below. Visitors to GQ with ad blockers enabled were greeted with a banner inviting them to either disable their ad blocker or pay to read GQ content.

For the payment part, GQ is using CoinTent, a micropayment system started earlier this year that lets publishers charge for access to an article or video. Once you click the pay button, you’re prompted to set up an account with a digital wallet that’s designed to make it easy to buy content around the Web. CoinTent’s site also lists another Condé Nast site Epicurious as a client. GQ and Condé Nast haven’t responded to requests for comment.

In the next part of this series, I’ll continue with an overview of the “Engagement” strategy as well as the “Expanded choices” strategy that publishers are adopting to mitigate the effect ad blocking has on their businesses

Thank you for reading our “Ad Blocker Strategies” article series. Contact us for more information about how we can help you build a successful strategy using more engaging and contextually relevant ad products.