Publishers, brands and tech vendors from Europe gathered last week in Dublin, Ireland for Digiday’s Programmatic Summit Europe, to discuss the latest trends in the industry.

We caught up with Hila Nakash, our Head of Publishers’ Development and with Amit Altman, our Publisher Development Executive, who attended the summit on Imonomy’s behalf and came back with very useful insights on the state of programmatic advertising:

What were the hottest subjects on the agenda for Publishers?

Hila: “I felt two particular issues were dominant in our meetings with publishers, as well as with the summit’s speakers. Naturally, the breaking news on Google’s ad blocker was the first topic to come up on many of our meetings.

Some of the publishers were taken by surprise, but I believe most of them do realize it also bears great potential for additional revenues – if it does manage to curtail third-party ad blockers and if they focus their monetization strategy on non-intrusive ad formats.

Another dominant point of discussion was brand safety, particularly after the YouTube crisis in which major advertisers, especially in the US and the UK, pulled their ad budgets out of YouTube. Brand safety is a major worry in the industry, there were no surprises there, but it was a timely alarm bell for publishers and tech companies alike to aspire for more transparency.

That can only come through establishment of trust – making sure the advertising ecosystem works in favour of all its participants”.

What is the key message Publishers should take away from the summit?

Hila: “When you come to think of it, most of the issues discussed at the summit – whether it’s header bidding, transparency or third-party data usage in programmatic – are related to the user. The need for a user-centered approach was a leitmotif in meetings, workshops and presentations. It has become clear that user experience has to take center stage.

For example, there’s a lot of emphasis on viewability in the industry, which is perfectly understandable because it’s a genuine worry for brands in particular. But for publishers, there is a realization that you have to balance the need for viewability with the user’s side as the main point of consideration.

User experience is the key for publishers’ monetization success and we’re certain this trend will continue”.

Which session did you find the most interesting?

Amit: “Jonathan Nash from Teads had a fascinating presentation. It successfully highlighted the current problems with programmatic video advertising, especially with formats such as pre-roll ads which users hate as they find them annoying and intrusive. That’s a major challenge for publishers.

The key message was that the future of video monetization is very much a native one. Publishers constantly looking for better and friendlier ways to monetize videos – and rightly so, as a prominent visual content that engages users.

Utilizing video inventory while remaining respectful to users’ preferences is a recurring need which we’ve witnessed on our meetings with Publishers. Whether it is in-video or below the video ad units, we’ve had extremely positive responses to our solutions for video monetization as part of a more user-focused strategy”.

Let’s talk about header bidding. What were the main talking points?

Amit: “Header bidding is still regarded as the wave of the future in programmatic advertising, and with Facebook’s Audience Network now offering header bidding to premium publishers such as the British MailOnline, this trend is only likely to grow. The use of header bidding has benefited publishers and they should continue to see a further rise in revenues.

With publishers seeking to increase revenues and optimize their inventory, they should include header bidding in their monetization plan and create relationships with as many bidders as possible. But as Lauren Dick, head of emerging platforms for MailOnline pointed out to Digiday – ‘it is not a silver bullet for publishers’.

It goes back to the issues of trust and transparency, both highlighted at Digiday’s summit, as well as other issues that need to be resolved like latency”.

Hila: “Meeting publishers at events like Digiday’s Programmatic Summit is such a crucial part of our work at Imonomy. Finding out more about their needs and gaining insights on how we can help publishers to develop their monetization efforts. It was a very successful event in a beautiful venue. And, well, Ireland is amazing!”

Wish to meet Imonomy? Meet us at OPS NYC! 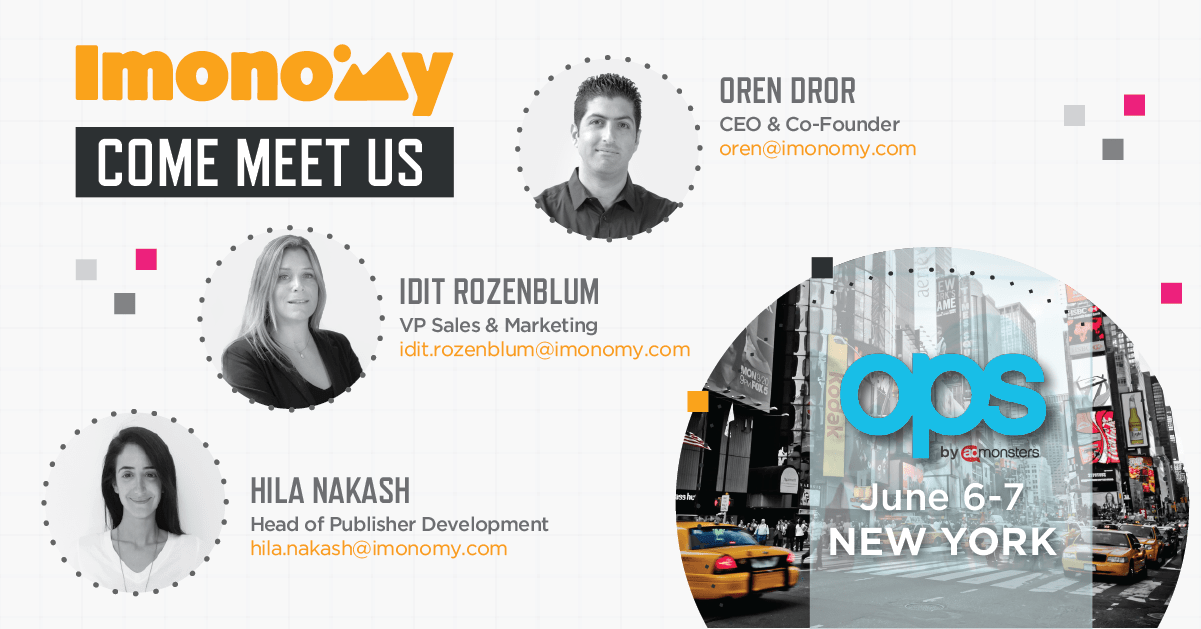